Lazy eye is a treatable eye condition.We at Latika Child Eye and Squint Clinic are one of the best in the treatment of lazy eye in Mumbai.
Dr.Manish.V.Shyamkul, Pediatric Ophthalmologist & Neuro-Ophthalmologist

Lazy Eye is also called as Amblyopia. This condition occurs when brain and eyes are not working together and results in decreased vision. Most of the time this condition occurs and is most commonly encountered in childhood, as a result of which normal development of the visual system suffers.

What does vision look like with a lazy eye?

The eyes may appear structurally normal from outside but may or may not have certain problems which can be detected during detail examination. Decrease vision associated with a normally appearing eye which may be normal or might have certain vision obstructing elements is one of the common presentations.

The question arises that when the eye is structurally appearing normal then why the vision is decreased or reduced.

As the age advances due to lack of proper stimulation and development in the eye becomes weaker and weaker and hence it is also called as lazy eye (Amblyopia).

Signs and symptoms of lazy eye

Most of the time patients are not even aware of decreased vision in one of the eyes. This is mostly recognized as an accidental finding when the other eye is closed or has got some problem and as the good working eye is no longer functioning properly patient gets aware of the decreased vision in the other eye.
The other good eye of the patient which has got good vision usually becomes stronger and more preferred and hence patient continues to use only that eye which in turn gives more stimulation for the development whereas problematic eye becomes a preferred and hence is not used which in turn decreases the stimulation and hence the development (lazy eye).
The lazy eye not only suffers from reduced vision but also has got decreased depth perception, contrast sensitivity, and impaired contour detection.
Under any circumstance, the patient continues to use the good eye and is able to function and do the daily activities with the sound eye and as his tasks are completed without any difficulty he is never aware of decreased the functioning of the other eye. This is the most common presentation. 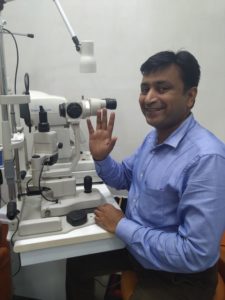 As the eye which is in of normal position receives less stimulation and Less development becomes weaker and as it is not being used continues to deviate out words on words resulting in progressive squint, and may or may not be associated with reduced vision depending on alternate fixation.

In this condition, one of the eyes of the child either may have a refractive error (child with glass prescription) since birth or may develop in the later years in childhood. This glass power if prescribed and used by the child results in the proper development of the eye but in case if the refractive error is not corrected the vision development in the affected eye is hampered and the child continues to use the other good eye.

The affected eye is never used by the child and become weaker (lazy eye) and such a situation is called as Refractive Amblyopia. And hence it is very important that all the newborns must be screened for refractive error or if facilities are not available then at least must be screened during school checkups so as to recognize the problem is existing and pediatric ophthalmologist’s consultation and treatment must be initiated.

For example – If a child has got say -4.00 cylinder or sphere in re and the left eye is having zero power which was acquired during the developmental period. Parents were not aware of this condition as the child was always using his left eye for all the day-to-day activities and the left eye was not utilized.

As a result of which the left eye became stronger and the right eye became lazy eye. In the later part of life if at all condition is diagnosed and the child starts wearing Glass that does not mean that the child will always get a normal vision.

But such a condition will be able to maintain the vision and might prevent further deterioration but not necessarily improvement in vision. For further improvement in the vision some kind of exercise or therapy is must which has to be initiated and monitored by paediatric ophthalmologist.

Taking another scenario in which the same above-mentioned child was diagnosed to have glass during the developmental period but child did not wear glass regularly, and during his adulthood starts wearing the glass regularly.

Even though the glasses were initiated in childhood since they were not used to regularly and nor other therapy was given so the gain will be subnormal vision and again will not improve even after he starts wearing it regularly during the adulthood. And hence timely intervention diagnosis and consultation and good monitoring by paediatric ophthalmologist is essential to overcome such a unfavorable outcome.

Deprivation Amblyopia:
This occurs when an eye which is structurally normal from outside has got certain ailments which are not visible from outside and result in obstruction for a well-focused image formation. These conditions are detected only on detail examination and hence detailed checkup is mandatory. Certain common examples of this condition corneal opacity, congenital cataract, corneal haziness, ptosis, haemangioma, media opacity inside the eye etc.

Normally when our eyes are able to focus a good sharp image and are present it to the brain this results in proper stimulation and development of the brain which deals with the image formation, reception perception, and interpretation.

But when one of the eyes is unable to focus a sharp image and producers are a blurred image which is then presented to the brain this results in under stimulation of that particular brain area and results in reduced vision.
This stimulation of the brain and its perception and development is a time bound phenomenon. It occurs during the early childhood and is also susceptible to treatment and therapy if a child presents early and a pediatric ophthalmologist initiates treatment timely.

Traditionally the Treatment of Amblyopia in Mumbai must begin in the early childhood so as to achieve maximum benefit and favorable results. But due to some reason if medical consultation was not sought and parents and child were unaware of the situation and was never treated which is commonly encountered in our patients.

In the later part of life when such a condition is diagnosed but due to the completion of visual development of procedure , the patient is left alone with the amblyopic eye and is compelled to live with amblyopia for the rest of his life.

Review of literature has shown good number of isolated case reports which have shown improvement even when such a case was treated in the later part of life and at times as shown desirable results. It is only possible if the patient is very well aware of the disease process, the circumstances and the guarded prognosis and patient is willing to take the efforts for the treatment and for the therapy. These case reports are indeed a ray of hope for all those adult and elderly patients for whom the treatment is denied or never offered.